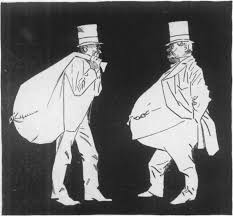 And, if you won't carry any kind of load as an adult, you don't deserve to be happy. Or be fed. Or have a place to live.
In a traditional family, where the wife is a full-time mother and homemaker, she carries her own special kind of load.
When someone in your group says, “Let’s go get pizza!” That person should be the first person to pull out money to pay their shair.
‘Shair’ is a word I made up.
It means ‘fair-share’.
Shair.
People who like to tell stories, should also like to listen to stories from others, but many of them don’t.
They talk just to be the center of attention.
Barton had a knack for knowing which people carried their shair.
He went to the Iowa State Fair several times, and one year, saw a hot air balloon.
He said that some people he knew were like those balloons.
They are full of hot air but couldn’t carry much of a load, for the size of their mouths.
Eric J. Rose
middlegrademysteries.com
photo: Jstor
(c)2021, All Rights Reserved
Copyright ©2021 Middle Grade Mysteries, All Rights Reserved.