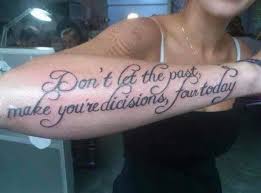 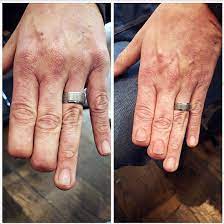 One reason for this website is to help young people avoid mistakes they will regret later.
If there was ever a synonym for the word ‘regret’, it is ‘tattoo’.
Tha taup pikshure showz a tym wen too pore spelrs medt.
So many people regret one or more of the tattoos they had installed when they were younger.
Why do people get tattoos? Here are a few reasons that I know of:
1) Tattoos are bumpers stickers for people who don’t own cars. Tattoos send messages about what to expect
from the tattoo wearer. Some tattoos are warnings, some are invitations, etc.
Tattoos are a way of communicating without talking. Unfortunately, if we have a face tattoo,
and are interviewing for a job at age 28, the message we wanted to send at 19 years old, is still radiating
from our face tattoo.
2) Tattoos can happen when drunk, with friends. Perhaps tattoo parlors should test BAC levels.
3) Some people get tattooed when they first fall in love as a young adult. That's dicey.
4) Some folks think they are making themselves more beautiful with tattoos.  While many tattoo artists have a lot of
skill and produce artful work, many people feel there is nothing more beautiful than untampered-with body,
be it a tiger or a human.     Each creature has its own kind of beauty.
5) Conversely, tattooing is used to distract from scarring or birth disfigurements, which is understandable.
This is called ‘Cosmetic Reconstructive Tattooing’ or ‘Reconstructive Pigmentation’.
The 2nd photo shows a man who lost two fingertips in an accident, so he had likenesses of fingernails,
tattooed to the end-ish part of what was left of his fingers. It looks very good.
However, tattoos on young people often tell a story about their family lives while growing up.
Tough childhoods often spawn angry tattoos.
This is something you might not understand now, but it reverts back to Reason #1 for getting a tattoo.
People are sharing their stories; their pains and their hopes for their futures.
Just don’t let your 19 year-old-self get a tattoo, that will damage your job interviews when you are 28, or 38.....
Expect your visible tattoos to bring a reaction. That's why you had them done, right?
So, I agree with the sentiment of the first tattoo,
"Don't let the past make you're dicisions four today"
Eric J. Rose
middlegrademysteries.com
photo 1: distractify.com
photo 2: riverfronttimes.com
(c)2021, All Rights Reserved
Copyright ©2021 Middle Grade Mysteries, All Rights Reserved.